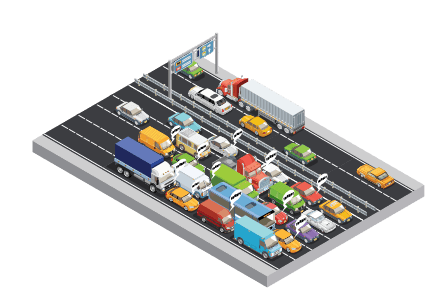 Car horns make up the majority of the natural soundtrack of a city. In such a populated area, there’s always someone somewhere waiting in traffic. Over time they may grow restless and become more vocal with their vehicle’s horn.

Chicago Traffic by Time of Day

The city of Chicago is no exception. Having the third most populous city in the United States, there tends to be traffic –and lots of it at times. Residents commuting to work from a surrounding suburb report an average of 48 minutes traveling from their home to their workplace in the city.

Chicago traffic is no joke as it’s known to make up more than $6 billion in fuel and wasted time on the work clock. With epidemic stats such as that, drivers are mindful of their commute times with a general idea of when traffic patterns tend to increase or decrease. For Chicago drivers, it’s imperative to know. So, here’s a guide with everything to know about traffic patterns in the Chicagoland area.

First, let’s talk about Chicago. The city’s population is so huge because businesses all over the world set up shop along the lakeshore. Industries such as tech, finance, telecommunications, media, and commerce flourish in the Loop and the surrounding communities. The Chicago O’Hare International Airport is the busiest airport in the world, with thousands of travelers passing through daily. You can only imagine the traffic patterns that may cause. So, if you’re looking to drive around Chicago and the Chicagoland area, it helps to know the following.

What are the rules of the road in Chicago?

Before diving into the traffic fluctuations of Chicago, let’s get acquainted with the rules of the road in the Windy City. For the most part, driving in Chicago is consistent with the common traffic laws and practices around the nation. However, there are some specific traffic regulations that should always be kept in mind when driving in Chicago.
Rules of the road that are enforced are:

How bad is the traffic in Chicago?

When the average Chicagoland area driver checks the traffic report on their phone before work, they’re mostly looking at what it looks like on the Illinois expressways north and south of the city. The exact time of the commute depends on what neighborhood they live in. For example, a driver living in Lincoln Park will have a shorter commute than a driver from Evanston. Someone living in the city would have an easier time getting around since the streets are laid out like a grid going in all directions of a compass.

When it comes to the expressways, traffic jams are a regular occurrence. The only thing you can do is plan ahead and time your commute just right. Odds, you’ll be commuting to work during the morning anytime between 6 am to 8 am. This is the time when traffic is the most blocked, with everyone trying to get to work. By the end of the workday, from 4 pm to 6 pm, the traffic picks up again, if not more intensely. These times are what’s known as rush hour. A 30-minute commute to the suburbs from the city can quickly turn into an hour excursion. It helps to be wary of these times.

Of course, there are the express lanes. The city switches it up throughout the day to compensate for rush hour traffic. During the morning hours, the express lanes are open going towards the city. In the afternoon, the express lanes are switched, so they head out towards the suburbs where the majority of traffic is going. Despite harsh winter conditions in the cold months, summer is actually the season where traffic moves at an all-time slow with the number of drivers on the road. While you may not be able to avoid rush hour all the time, you can be a safe and patient driver.

What are the busiest sections of the interstate in Chicago?

As we go over the busiest streets and expressways of Chicagoland, you begin to see a pattern and can plan the most time-effective commute to and from work in the city. It’s all about managing your time and avoiding waiting in congestion.
The busiest interstates in Chicago include:

What are the least busy sections of the interstate in Chicago?

The above interstates are so congested with traffic because the areas they connect are suburban routes where the population is significantly less. Drivers usually come to these sections after passing through a traffic-jammed interstate. There’s also a noticeable decrease in tolls.
The least busy sections of the interstate are:

What streets in Chicagoland get the most traffic?

Getting into the city doesn’t mean you’re out of the thick yet. Traffic congestion is common on some of Chicago’s busiest streets. Much like the expressways and interstate, there are certain times where traffic spikes.
Here are some of the most used streets in the city:

What is the traffic like in the heart of the city?

The busiest streets in Chicago are the ones over the River. This area is around the Magnificent Mile and north of the Loop. While the speed of traffic may vary depending on the time of day, there are always drivers present on the road. Streets that see 24-hour traffic are North Lake Shore Drive, East Congress Parkway, North Michigan Avenue, West North Avenue, North Western Avenue, North Ashland Avenue, and West Roosevelt Road. There may be significant spikes in traffic during the morning and evening rushes.

What else is there to consider about traffic when driving in Chicagoland?

By now, you have a general knowledge of Chicago’s traffic patterns and what expressways and streets tend to be the busiest. A couple more things to be aware of is that the evening rush hour during the pm hours tends to be more congested. What’s more, is that Thursday and Friday tend to see more drivers on the road than any other days of the week. Traffic data indicates that people are doing more than just commuting to and from work on those days.

Time is difficult to compensate for in Chicago traffic. Drivers who opt to take Lake Shore Drive as opposed to the crowded expressway save little to no time when switching routes. It helps to find the shortest route possible when driving to the city and stick to it. Trying to find a detour can lead to running into more traffic. Being aware of traffic conditions is all part of being a safe driver.

Don’t forget to stay insured when driving on Chicagos' roadways. Insurance Navy has the best Auto insurance in Chicago offering the best rates for all cars and drivers. Low-cost car insurance is just a few minutes away. Contact Insurance Navy for your free auto insurance quote today. Quotes are available over the phone at 888-949-6289 or online.