Uber Driver Requirements: Do You Qualify to Drive for Uber in 2022? 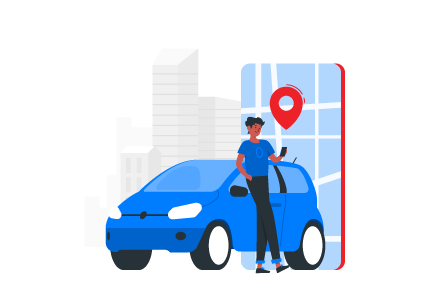 With over 10 million active riders, it’s a likely estimate that nearly every five minutes, an Uber is called or used. That’s around five million rides in one day. The rideshare business is both necessary and in-demand, and for many of their drivers, it can be lucrative as well.

That’s why around 50,000 new drivers sign up every month. Perhaps you are thinking about becoming one of those 50,000 drivers this month and applying for a job as an Uber driver.

However, when it comes to Uber, it’s more of an acceptance process rather than an application. That would mean making sure you fill all of the Uber Driver Requirements they will throw your way. From there, it’s all up to you to make the best out of your ridesharing career. Consider this your tell-all guide to getting fulfilling all the Uber Driver Requirements and how to be a smart, independent contractor while doing so.

What Are Rideshare Apps?

One of the defining features of Uber is its app. In fact, it’s their business model. These apps integrate drivers and users in one complete rideshare system. The communication is far better than in taxis, as with taxis you can’t totally see where you are going or what you’re being charged without at least looking at the dashboard. Rideshare services like Uber conveniently bring that ability to your fingertips.

Rideshare apps often calculate riders’ rates before they even get into the car. Payment is processed before the ride, and tips can be given to the driver through the app after it is complete. At the same time, drivers are given limited rideshare insurance through Uber -more on that in a later section.

Uber Driver Requirments every driver must have

There are two areas you need to be prepared on in order to be successful in your Uber driver acceptance process -personal and vehicle.

The personal Uber Driver requirements to be an Uber driver are:

Uber Driver Requirements for your Vehicle

Uber also has a standard for the vehicles used for their clientele. However, the Uber Driver requirements may differ from one city and another. Uber’s website has a page that lists all their eligible vehicles for any zip code or vehicle make and model.

General Uber Driver Requirements for your vehicle are:

Uber offers different rideshare services based on the number of passengers and service speed. The type of car a driver has can also affect which service they are placed in. Uber X is pretty much the standard Uber service that services up to four riders. This would be the service for many mid-sized cars like the Toyota Prius, Honda Accord, or Civic.

These are the types of vehicles that are qualified for Uber X:

Uber XL is the service for larger groups of passengers looking for a ride. Rates are naturally higher because of this. Because of their storage space, XL Uber vehicles are often used for trips to the airport. This includes car models such as the GMC Acadia, Jeep Cherokee, and GMC Yukon XL, which can seat six people.

These cars must also satisfy the following Uber Driver requirements for vehicles:

Uber Green is for cars that are electric or hybrid. If their carbon footprint is smaller than a standard car, then they will qualify as an Uber Green vehicle. This service is unique because passengers are given a surcharge of $1, which is split between the driver and Uber’s effort to reduce their own emissions. These cars are typically the same size as Uber X cars. Keep in mind that Uber Green may not be available everywhere.

Drivers with high-end, luxury vehicles are placed into the Uber Black service once their acceptance process is completed. This is the highest standard Uber sets for their cars and is applicable to both regular-sized cars and SUVs.

Uber Lux is an exclusive service in New York and California. It features high-end car makes and models from brands like Porche, Mercedes, or Lexus.

They usually must be full-sized vehicles with the following features:

Uber Driver Requirements for food couriers are less stern than their other services since no passenger will be using them.

Virtually, any vehicle can be used for Uber Eats as long as it has:

Everything About the Uber Car Inspections

Part of the acceptance process is bringing your car into one of Uber’s activation centers for inspection. Sometimes an Uber inspection can be done at a body shop which you would have to pay the mechanic a fee of around $30.

The inspections will cover features of your car such as:

However, not every city may require a car inspection for applying Uber drivers. Some locations may also allow a 30 days grace period before an inspection is required. Uber’s app has an inspection center locator that every new user gets acquainted with.

You can’t really understand auto insurance for Uber drivers without first understanding car insurance itself. Nearly every state has its own car insurance requirements for its drivers -often referred to as liability auto insurance. This is a type of insurance that covers damages and injuries to another driver or party in a car accident. Every state sets its coverage amounts differently, but there is an average.

Auto liability insurance is structured by the following coverage:

Uber typically requires their drivers to carry the outlined coverage. However, when it comes to Uber Driver Requirements and other ridesharing companies, drivers may also have to carry rideshare auto insurance.

What is Rideshare Insurance?

Basic auto insurance doesn’t fully cover drivers when they are on the clock. The time would start the moment a passenger steps into your car. While commercial auto insurance is required for some Uber services, it would be a little extreme for a simple rideshare car. Uber does insure their drivers with its own rideshare insurance, but its coverage may be limited during certain times.

Here’s how Uber’s rideshare works based on the following phases of ridesharing:

In order to provide coverage for the gray area of period 1, some drivers opt to purchase rideshare insurance from their auto insurance provider, so they are consistently covered for all periods of ridesharing.

How Much Does Rideshare Insurance Cost?

The good news is that rideshare insurance is one of the cheapest auto insurance policies on the market. A policy can cost anywhere from $9 to $27 per month. It may even be as much as $500 per day, depending on circumstances. This would be added to the costs of your auto insurance premium. Uber drivers aren’t required to have their own rideshare insurance, but paying the extra rates can help them if they get into an accident while waiting in between rides.

How Much do Uber Drivers Make?

Because Uber drivers are independent contractors, their earnings, how they manage them, and expense are all their responsibility. That being said, on average, an Uber driver makes anywhere from $10 to $20 an hour. Drivers also utilize earnings tracking apps and work as their own accountants.

Examples of expenses that drivers will be responsible for are:

What Are Ways Uber Drivers Can Increase Their Earnings?

Another reason you’re reading this article is that you also want to know how to be a financially smart Uber driver.

Here are some tips on how to make more as a rideshare driver:

How do Rideshare Drivers Pay Taxes?

As independent contractors working on their own time, Uber does not deduct taxes from their driver’s pay. Therefore, they are responsible for their taxes. This means that you would have to set aside some of your earnings at the end of every year when Uber sends a 1099 form to include with your tax return for that year. This is also the standard tax practice for freelancers. You can also write off as car maintenance or gas as business expenses. This is why it’s important to keep track of your car’s mileage and gas station receipts.

Again, you have to take note of everything Uber does not cover for you. Also, check your state government for minimum wages laws for independent contractors like Uber drivers. Some states, like California, have laws that mandate workers’ compensation and health insurance. In California, rideshare drivers are considered employees and entitled to such benefits. Look into your state laws or consult an accountant for a more personalized approach to taxes.

What Does Uber Cover For Their Drivers?

While the last previous sections on what you will be responsible for maybe off-putting, the good news is that there are some costs that Uber covers for their drivers. In the event a passenger damages the interior or exterior, Uber will charge them a fee. The fee is based on the cleaning cost and then passed to the driver for them to use.

Another expense of driving that Uber covers for their drivers are accumulated tolls. The toll is added to the passenger’s ride bill as they are charged before getting in the car. This charge will also be visible to the driver.

Do Uber Drivers Have to Pay Anything to Uber?

Uber notably charges its drivers a service fee for each trip they complete. This would be the difference between how much the rider paid and how much you earned. Taxes or any surcharges are not included.

What Are Ways to go Above And Beyond Driving For Uber?

Lastly, Uber is a customer-based service, so how much money you make is a reflection of how much your customers value you -especially when it comes to your Uber driver profile rating. It’s possible that you can make a steady income from Uber by following these practices: