My Belts and Brakes Are Squealing, What Does it Mean? 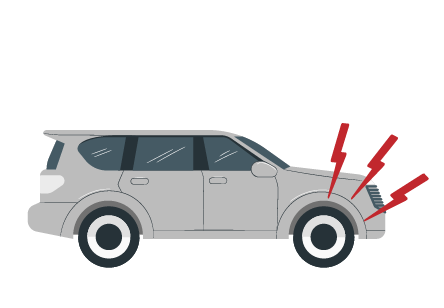 Despite the fact that nearly every new vehicle has digital displays and gauges, weird noises like squeals can’t be suppressed. Dashboard warnings might assist you in detecting a problem before it becomes critical, but the brake system produces frequent squeals, which are typically brushed off as unimportant. But you may expect it to resurface.

Things to Know About Your Brakes

The brakes of a vehicle are composed of several components. Squeaks and squeals can become louder as those elements wear down. It’s all about recognizing the sound of a little squeak created by brake dust gathering. A louder noise signals it’s time to replace them. Over time, disc brakes produce brake dust as the pads decay.

When your brakes are depressed, the pads come into contact with the rotors, creating dust—the friction generated by this causes the pads to degrade. Modern automobiles are going with open-wheel models and ditching closed-wheel layouts, which exposes them to greater levels of dust. Brakes squeal when pads reach their operating temperature, which signals it’s time for a brake service. Squeals may be detected by the brake warning system, which tells you that the pads are on the verge of wearing out.

In fact, one of the most common causes of a grinding sound while braking is because the brakes have worn down. This will be especially true if you don’t change them as often as necessary or if you hear a screeching noise when braking. Ceramic pads can reduce squeaks and squeals.

Everything to Know About Your Engine Belts

If your vehicle’s engine grinds when you’re driving, the belt squeals to let you know it’s time to check it out before your automobile gets trapped or damage is caused to the motor. It’s unlikely that the belt will fail suddenly, but there’s a chance it won’t last as long as you’re hoping. When the belt starts to slip because of wear and tear, it is usually due to friction and heat.

You don’t want to put it off until something catastrophic happens. If you’re not sure whether the belt is broken or about to break, get your brake system inspected to see if it would save you money in the long run. It’s conceivable that the belt or belts are in good working order, but they just need a bit of belt dressing or conditioner to quiet the squeal. Both a brake squeal and a belt squeal can be avoided. It’s preferable to find out there’s nothing wrong rather than having to pay for costly repairs.

You don’t have to keep paying high rates for good coverage. Insurance Navy can help you get cheap car insurance today. Call 888-949-6289 or request a free quote online. Need more assistance? Stop in at one of our many storefronts to speak with a representative.