Everything You Need to Know About Red Light Camera Tickets 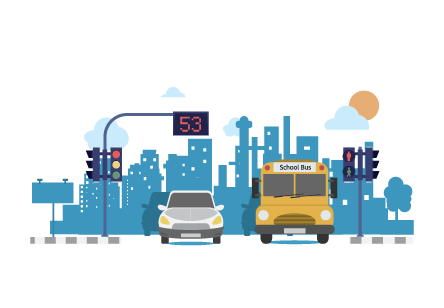 You would be surprised by the number of traffic collisions and accidents that occur at red light intersections due to drivers thinking they’ll make the light that just turned yellow before they have to stop. Yellow means the light is about to turn red, not speed up and try to make it, but a lot of drivers seem to make it a challenge. More often than not, just as they crossing the intersection, the light turns red, and traffic then resumes. The risk of an accident occurring goes up when someone is speeding towards a soon-to-be red light. To combat this reckless driving, many intersections have red light cameras installed. Perhaps you’ve already be acquainted with one after speeding through an intersection and receiving a ticket in the mail. Maybe that flash as you were passing the light wasn’t someone adjusting their high beams after all. This short guide covers the what-ifs and how-tos of red light camera tickets.

Why do we Have Red Light Cameras at Intersections?

Red light cameras are there to keep our intersections and roads safe from reckless driving, and they’ve been doing their job. When red light cameras were first introduced in 1992 in New York, the Department of Transportation reported a 63% decrease in intersection crashes. Intersection collisions also make up a significant percentage of traffic accidents at around 22%. Some of these accidents are more than capable of being fatal. Now, cameras at intersections are common in most places. It’s all part of the process of normalizing, slowing down, and stopping at yellow lights as if they were red lights, just as we were taught in driver’s education. However, there are some states that don’t use red light cameras.

How do Red Light Cameras Work?

Red light cameras are visible on the traffic intersections they are installed on. Their lens is highly noticeable. At the same time, some signs prior to the intersection may point out that the intersection has a red light camera. Motion sensors are used to detect oncoming cars when the light has changed. The camera then takes a picture when it detects that a car passing through when it shouldn’t. From there, the photo is reviewed by certified personnel before the ticket is issued and mailed out. Some red-light cameras are reported to have small grace periods of one second after the light turns red, but most drivers will not want to test that theory.

How Much is The Fine For a Red Light Ticket?

Receiving a ticket from a red light camera carries a couple of penalties that can be costly. The consequences are:

Should You Worry About Red Light Camera Tickets?

Running a red light is a day one lesson of what not to do in driver’s education. It’s an easily avoidable offense that can be prevented by simply slowing down whenever you see the light turn yellow. The good news is that this kind of violation won’t haunt you forever. The fines are easily manageable with online payment plans, and your insurance rates won’t take a considerable hit. The only long-lasting effect of a red light camera ticket is the never-ending journey to become a safer driver.

Insurance Navy offers quality car insurance coverage at low rates. Get a free quote today via our website or mobile app. You can also drop in at one of our many locations or call us at 888-949-6289.