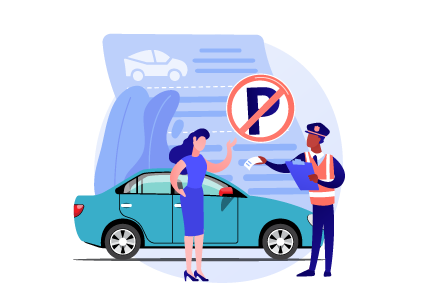 Traffic citations are frequently given. However, you have the option of fighting traffic tickets and violations. In traffic court, you may dispute any moving violation citation, speeding ticket fines, and virtually any road infraction penalty.

While you have the opportunity to defend yourself in traffic court, there are several traffic citation rumors that might mislead you. Some individuals think that they can get out of a speeding ticket by relying on a falsehood, which may result in them owing money or going to traffic school despite receiving a fine. You can reduce your chance of receiving a speeding ticket, but they are nothing more than folklore.

It’s high time to set the record straight and reveal the most prevalent traffic ticket myths and misconceptions.

What Are The Most Common Traffic Tickets Myths?

Traffic Myth #1: If There is an Error on The Traffic or Speeding Ticket, the Ticket Will be Dismissed

Unless it’s a major blunder, such as a misspelling, the wrong number, or other small spelling and grammatical errors, you won’t win your case in traffic court.

Little mistakes like typos do not help drivers win their traffic cases in court, but listing the wrong driver, providing an incorrect description of the car, citing an incorrect road where the traffic violation occurred, and other substantive errors might.

Traffic Myth #2:The Police Officer Doesn’t Show in Traffic Court, so The Traffic or Speeding Ticket Will be Dismissed

If the police officer who wrote your traffic citation fails to appear, you will not automatically win in court.

While bright hues certainly attract more attention, there is no evidence that red cars receive more citations than any other vehicle. While many believe it to be true, there is no statistic to back up that a red car is prone to more traffic and speeding tickets.

Traffic Myth #4: A Traffic or Speeding Ticket From Another State Will go Unnoticed in Your Home State

This is not the case.

The Interstate Driver’s License Compact is a compact in which participating states will forward any reported moving violation or out-of-state speeding citation to the home state of the recipient.

Georgia, Massachusetts, Michigan, Tennessee, and Wisconsin are the only states that do not participate in the compact. But, rules and standards are frequently changed.

Even if you reside in one of the states that do not participate in the DLC, don’t expect to be released from paying your traffic or speeding fine.

Traffic Myth #5: You Can Talk Your Way Out of a Traffic or Speeding Ticket

It doesn’t matter why you were speeding; you will still be fined. In fact, by offering an explanation for your speed, you are admitting to breaking the law. If you choose to take legal action, this information will be used against you.

When a police officer approaches your car with a radar gun, the best approach is to always respond “no” when they ask if you know why you’ve been stopped. Simply accept the traffic or speeding citation, and your chances of fighting it in traffic court will improve dramatically.

Traffic Myth #6: You Can’t be Pulled Over by Police if You Have a Radar Device

The standard radar detector may provide drivers the impression that they can drive more quickly or commit a traffic or speeding infraction at any time.

Radar detectors, on the other hand, are often in pursuit of new technology as law enforcement agencies upgrade their speed detection equipment, which may outperform your radar detector. Some states have banned them, while others are in the process of doing so.

Traffic Myth #7: An Unsigned Traffic Ticket or Speeding Ticket Will Have to be Dropped

Even if you do not sign a traffic ticket or speeding ticket, it is not uncommon for people to be fined.

Signing a speeding or traffic ticket does not imply that you are admitting guilt or agreeing to appear in traffic court; rather, it implies that you recognize you will receive a traffic or speeding citation and want to show up in traffic court.

If you refuse to sign speeding or traffic tickets, the police officer and the judge will be irritated.

A police officer’s radar failure, on the other hand, might be valuable for your speeding case in traffic court. But you’ll probably be unable to produce any concrete proof to support that assertion before the traffic judge.

Even if you go through all of the above steps, your best bet is to show that the police officer’s equipment has not been recently calibrated. Obtain the police officer’s calibration records and enlist the aid of a traffic ticket attorney if you wish to pursue this defense, but it is more expensive.

Traffic Myth #9: Passing Drivers is a Legal Reason to Speed

If you go over the posted limit, there’s no turning back. It’s simply impossible to dispute that passing a driver is a legal reason to speed.

If you’re driving behind a car that’s moving slowly, pass it in a safe manner or pull back till you can safely move lanes.

Traffic Myth #10: Speeding Because Another Driver Was Speeding is Legal

Just because the driver in front of you speeds doesn’t mean you should too.

Whether or not you received a speeding ticket for going five mph over the speed limit when your neighbor drove 50 miles per hour in a school zone has no bearing on the matter.

Whether or not others were able to get away with it, if you are caught speeding, your traffic penalty is valid.

Traffic Myth #11: You Need a Lawyer to Drop a Speeding or a Traffic Ticket

Although traffic ticket lawyers say that you can’t have your speeding or traffic violation dismissed without legal counsel in court, this is not the case. If you put in a little effort and research, you’ll have a decent chance of defending your traffic citation before a judge.

Furthermore, most judges are more inclined to accept pleas bargain for first-time offenders when the traffic or speeding violation is minor. Even if this isn’t your first offense, the expense of hiring an attorney may often outweigh the cost of paying fines in full.

If you truly believe you need legal representation, certain states have entire law firms that will fight traffic citations for a reasonable price.

If you’re shopping for auto insurance, your search ends with Insurance Navy. We work to pair drives with the best insurance that meets their needs.

Call us today at 888-949-6289 to get a free car insurance quote, or stop in at one of our many locations to get started. Don’t have time to speak with a representative? Quotes are also available through our website and mobile app.