How Much is a Ticket For Running a Red Light? 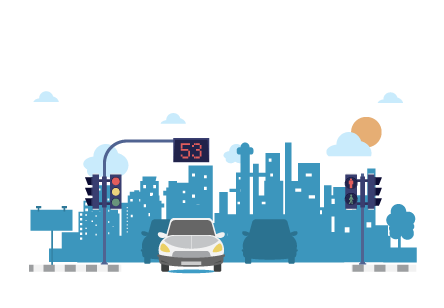 It’s a lesson learned while watching your parents drive as a child –red means stop. We also learned that yellow means slow down. But to many drivers, when a traffic light turns yellow, it’s a challenge to speed past it before it turns red. It’s for that reason why many traffic lights are fitted with cameras to ticket red-light runners since police officers can’t be everywhere at once.

Speeding through a red light is no harmless infraction. The traffic lights are there for a reason –to prevent fatal accidents from occurring at intersections. At the same time, fines for running a red light can run upwards to a couple of hundred dollars. The severity of the penalty depends on the state or jurisdiction. But all across the United States, red light tickets are handled in a consistent manner. Here’s everything you need to know when handling a traffic ticket of this nature.

What Happens When You Receive a Ticket for Running a Red Light?

You can be issued a red light ticket by either an officer on duty or a red light camera, in which the ticket is mailed to you. The very worst consequences of a red light ticket are you pay several hundreds of dollars in fines plus a license suspension. Since tickets like this are considered an infraction, you can never go to jail for them. However, it’s always best to handle the fines upfront as not to face more fines and driving restrictions.

The cost of a ticket for running a red light can range from $50 to $500. Nevada is known for having $1,000 tickets. Points are also added to your driver’s license by the DMV. If you’re unfamiliar, license points and their value represent how you rank as a high-risk driver. Ideally, you want no points on your license, which will keep your insurance rates low. Ignoring a red light ticket can cause the DMV to suspend your license. Traffic school or select driving classes are known to reduce or excuse red light ticket charges.

What Are Ways to Resolve Red Light Tickets?

The best way to handle a ticket for running a red light is to treat it like a bill –pay it as soon as possible before it’s due. However, there are other factors to recovering from a ticket of this nature, like license points. Here’s how to resolve red light tickets on all fronts:

How Does a Red Light Camera Work?

The majority of red light tickets are issued by cameras stationed at intersections. Millions of these are situated across the country, and while the municipals may set different ticket fees, the cameras all work the same way. The cameras detect when the light turns red as it is connected to the traffic light. From there, it works as a motion detector for the intersection. A picture is snapped whenever movement is detected during the time of red light. No picture goes unverified as personnel reviews them closely before a citation is issued and mailed.

There’s no cost difference in the citation when being issued by a camera or officer on duty. These tickets are mailed with all the camera and picture information, including the exact moment when it was taken. It helps to review these closely again as the machine could have made an error. Any discrepancies you find can be used in your favor if you decide to fight the ticket.

How Does a Ticket Affect Your Car Insurance?

A ticket from a red light carries different consequences in each state. In a state like Alabama, you may be subject to a ticket of at least $100 and a maximum of three points on your driver’s license. Meanwhile, in states like Georgia, the ticket may be $70, and no points are added to your license. As previously mentioned, insurance companies look at the number of points on a driver’s license to assess the amount of risk the driver may have. A high total of points may indicate a risky driver, wherein the insurers will charge higher premiums.

However, you may be lucky to live in a state like Alabama or Louisiana, where running red lights will not result in a mark on your driving history or points on your license. Thus, you won’t have to worry about any insurance increases. If an increase in rates is the last thing you need, then ask the DMV for approved traffic classes to have the license points removed.

How Much do Minor Traffic Tickets Like Running Red Lights Cost?

The fine for speeding past a red light or stop sign averages between $50 to $500. However, the average ticket a red light violator takes home is around $135. Let’s say that instead of passing straight through a red light, you took an illegal right turn while the light was red. Or, maybe you’ve ridden through a stop sign without acknowledging or seeing it. Those tickets are a $35 fine. The highest costing tickets you can acquire are in Nevada and California. A defensive traffic course required to take points off a driver’s license costs around the same amount. For one class, you can pay up to $40. If you’ve been issued a smaller ticket, it may not be worth it.

Not paying a ticket over the allotted time may result in more fines and a license suspension. It’s important to remember that you are in full control of your vehicle and running red lights is completely preventable. Driving safely and more aware when coming to intersections is a sure way to prevent tickets at a red light. Cameras and tickets are in place because 22% of traffic violations take place at traffic lights. You’ve been practicing it since you were a child crossing the street –stop and look both ways.

Don’t skimp on coverage to save money. Insurance Navy offers high-quality car insurance coverage at affordable rates. Get a free car insurance quote today to see how much you could be saving. Quotes are available online at our website or mobile app. You can also speak to one of our expert agents at 888-949-6289.