Can I Drive Someone Else’s Car Without Insurance? 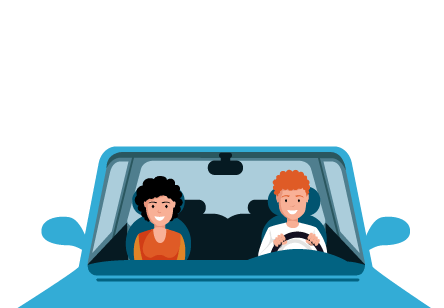 Whether you don’t own a personal vehicle or if it’s in the shop, for the time being, you may have to borrow a friend or family member’s car. Naturally, if you don’t have your own car, you may not invest in auto insurance since there is no car to insure. A question that insurance companies are constantly asked is, “can I drive someone else’s car without insurance?” The short answer is yes, but there may be discrepancies.

There may be instances such as an emergency situation where you have to drive or when you need to run some errands, in which you’ll find yourself behind the wheel of someone else’s car. The good news is that you’ll be covered by the car owner’s auto insurance policy.

Remember when we mentioned that since you have no car, there’s no need to buy car insurance? That’s because a car insurance policy insures the vehicle and not a specific driver. Because auto coverage applies to the car and not the person, all you would need is the car owner’s permission to drive their car. Consent to drive the car means that you would be covered under the owner’s policy. But are there coverage limits, and how much insurance do you have? Here’s everything you need to know when driving someone else’s car in terms of insurance.

How Can I Drive Another Driver’s Car Without Insurance of my Own?

All you have to do on your part is ask the owner of the car to borrow their car. Once you get approval, the insurance policy that they put on the car now applies to you as the driver. Think of it this way; when you use someone else’s car, you’re also using their insurance policy. This includes their liability coverage for damages and injuries you cause to another. This kind of coverage is usually required by law, so you may not be able to drive without insurance in some states.

This is what is called “permissive use,” and it’s valid for all types of auto coverage. If the owner of the car has collision and/or comprehensive insurance, then you’ll be covered on those fronts, too, while you’re behind the wheel, as long as you have their permission to use it. Comprehensive coverage would insure you if the car is damaged by an outside factor while it’s parked –anything can happen while you’re running an errand. Collision coverage would cover damages to the borrowed car regardless of fault. If the policyholder also has uninsured motorist coverage, that would also apply to you while driving.

What Happens When I Get Into an Accident With a Borrowed Car?

Since you’re covered by the vehicle owner’s policy, the amount of coverage you would receive is dependent on the policy limits they chose. If you’re responsible for an accident while driving the borrowed car, then the owner’s liability coverage will pay for damages up to those limits. The same for the additional coverage previously mentioned. If you’re hit by another driver, then their insurance should cover the damages and injury as if you are the owner of the car.

It’s at that time when the policyholder and owner of the car will file a claim with their insurance company. As all accidents and claims do, the policyholder’s premiums will see an increase. There’s no additional rate hike for the policyholder not being present in the car –but it’s still significant enough to make drivers hesitant to lend out their cars. Once you purchase your own auto insurance, you’ll understand it on a personal level.

When Would I Not Have Coverage in a Borrowed Car?

Before asking a friend or family member if you can borrow their car, think about if you’re listed on their auto insurance policy. This may be the case with family members and less with friends. Some insurance companies may let this slide, but others may require you to be officially on the policy.
Here are other reasons why you may not be insured while driving a borrowed car:

What if I am Ticketed in While Driving a Vehicle I Don’t Own?

Speeding tickets aren’t as major as a collision with another driver in the regard that they don’t even affect insurance or rates. That being said, it’s your driver’s record or history that will be marked up for something like a speeding ticket. This is common for most minor traffic violations like parking tickets as well. However, it helps to be mindful and treat every violation like a major one when driving someone else’s car.

If you haven’t heard, there is a great coverage option for drivers without their own cars called non-owner car insurance. While normal car insurance policies cover the car itself, non-owner auto insurance covers the driver themselves. It typically includes liability insurance for property damage and personal injury to the other driver and a car accident where you were at fault –the state’s required liability insurance. In addition to that, you may be offered policy add-ons like uninsured motorists, comprehensive and collision insurance. Ask the insurer what they include on their non-owner policies.
You may buy non-owner car insurance if you are a driver that:

The Most Important Things to Know About Borrowing Someone Else’s Car?

At this point, we’ve covered all aspects of borrowing another’s car and driving insured. It’s good that insurance companies are aware that people often share cars. That’s the reason why they have permissive use. So, always remember to ask your friends and family for permission to use their car, not just to be courteous, but so their liability insurance applies to the car while you are driving. Any damages and injury will be covered to the policy’s limit.

When driving, remember that accidents and the owner having to file a claim causes rates to rise. This means that your friend or family member will have to pay more to keep their car insured. It’s best to treat the insurance penalties as if they were your own and drive safe. However, if you desire additional coverage or borrow cars a lot, then non-owner car insurance may be worth looking into. In some cases, it may be the cheapest form of insurance you can have until you get a car of your own.

Lastly, talk to your household and insurance company to see if you are listed on the vehicle’s auto policy. Remember that car insurance literally applies to the car and not the driver, and the best kind of drivers are safe drivers. Do you have more questions on this topic? Read about Rental Car Insurance or Does Car Insurance Follow the Car or the Driver?