Whether you’re looking to buy your first motorcycle, or are a few years into riding and considering a change or upgrade, brushing up on the types of motorcycles out there is always worth the time. Who knows, you might just find something that re-ignites your passion for hitting the open roads on two wheels.

The Expansive World of Motorcycles

Cruisers, Supermotos, Sportbikes, Dual Sports, and Dirt Bikes, oh my! The world on two wheels is an exciting and exhilarating one, with no shortage of options to choose from. Yet to the uninitiated, the various types of motorcycles available may seem like a foreign language.

Motorcycles aren’t the only thing that moves fast in this industry. Manufacturers are constantly pushing the envelope, developing new and innovative bikes to thrill and excite.

This can make the hunt for the perfect ride a challenging one. Understanding the various styles of bikes can help you better evaluate weight, size, control and features to help you make the right choice.

If you find yourself a bit confused as to what’s out there, this guide is for you.

As the name aptly suggests, street motorcycles encompass a broad range of styles intended for use on the roadways. Designed for paved roads and highways, street bikes span a lot of makes and models including but not limited to those we’ll be covering shortly.

Examples include the Suzuki SV650 and the Honda Nighthawk. 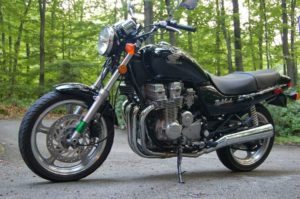 Engineered in the likes of, and inspired by racing bikes, sportbikes rank among the most adrenaline-inducing motorcycles on the market. Also commonly known as ‘crotch rockets’ among the motorcycle crowd, this bike’s unique design requires the rider to assume a tucked/crouched position, reducing wind drag and shielding the rider from debris while cutting through curves.

With sportbikes, agility, speed, and raw power are the name of the game.

This style features front fork mounted clip-on bars, high footpegs for improved clearance when leaning into sharp turns, and usually an inline four-cylinder motor. As for weight, the sportbike is a featherweight, offering superior maneuverability and easy handling for even the smallest built individuals.

That said, these bikes can also be a bit ‘much’ for those new to biking, and requires a certain amount of practice to handle safely. Speaking of safety, the sportbike also ranks among those bikes involved in the most crashes. As such, motorcycle insurance for this type of bike tends to land on the higher side. Something certainly worth considering if you’re in the market for a new motorcycle. 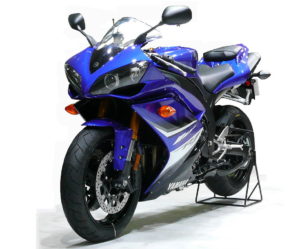 No, these aren’t the favored bikes of nudist colonies. The naked motorcycle combines the sporty tuning, agility and power of a sportbike, while offering up a more comfortable ride for everyday use.

Features include a more mature exterior, ergonomic riding position, sport suspension and braking, and a few more bells and whistles than a sportbike.

So where does the ‘naked’ come from? This bike lacks a windscreen, fairing, windscreen and other exterior add-ons, revealing more of the machinery underneath. 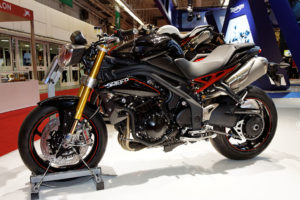 A take on the traditional sportbike, blending the tenants of a standard or naked motorcycle and dropping the fairings. These bikes feature elements of the sportbike (minus excessive fiberglass around the body), with the low rumble of a cruiser.

Examples Include: Triumph Street Triple R and the Ducati Streetfighter. 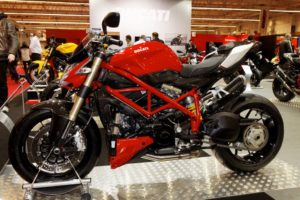 The behemoths of motorcycles, touring bikes are MASSIVE. Meant for, you guessed it, touring long distances of roadways and long trips. These bikes are ultra-comfortable, featuring big engines, superior wind protection, ample storage space, and even have room for a partner on the back. Typically the bike of the ‘older’ man or women, these what these bikes lack in sport, they more than make up for in comfort and luxury.

Easily identifiable by its large fairings designed to provide protection from the elements while riding, the touring motorcycle is the traveler’s best friend. It is not uncommon to see bikes with over 80,000 miles clocked on the odometer. 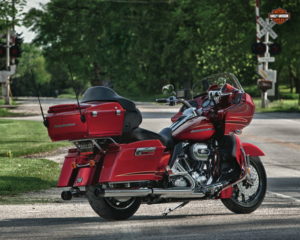 You’re a sensible lady or gent. You know that long-distance rides require a certain amount of comfort and ergonomics. You enjoy the pleasure of technology, a full-featured dash, and added storage space. But you also enjoy the invigorating feel of opening up the throttle on the open road. Sport touring motorcycles blend the sensibilities of touring bikes with bigger, sportier motors. 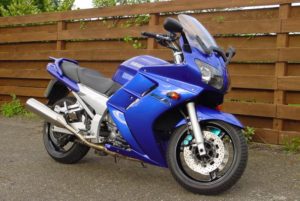 Known as a ‘chopper’, these bikes have been popularized on the big and small screen for decades and are nothing if not iconic. The favored bike of biker gangs and discerning riders alike, these motorcycles offer a lot between two wheels.

Large and in charge, the cruiser is an oversized bike, moderately heavy and engineered for cruising the streets. Featuring a relaxed and ergonomic riding position, mid/forward foot control, lower seating, and classically understated style, these bikes offer incredible comfort for all day rides.

Given their size and propensity for highway travel, these bikes are almost always powered by twin motors of 1000cc or higher, capable of delivering ample power throughout the whole RPM curve.

Although a solid ride for novice and experienced riders alike, those with small frames may find the heavy bike a bit much to handle.
Examples include pretty much any make and model from Harley-Davidson. 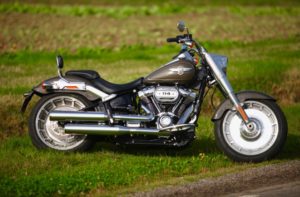 A variation of the cruiser, the prime differentiator is this bike’s footpegs. Both the shift peg and the brake pedal are positioned farther forward. This can give the bike a bit of a sporty feel, although at the risk of sacrificing comfort. Those with lower back problems will likely enjoy the standard model best. 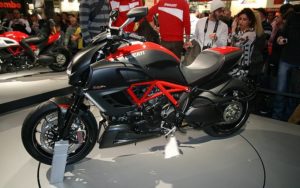 Popularized by shows such as “West Coast Choppers”, the chopper has long been a favorite of motorcycle enthusiasts. Starting with a basic cruiser design, the chopper is named for its ‘chopped’ down approach, excessively high handlebars and unique aesthetics.

You won’t find a chopper off the factory line though. Choppers are almost all custom-designed to the specifications of the rider, making each bike a true work of art and a one-of-a-kind ride.

The closest option that can be had without any customization is the Harley-Davidson Softail. 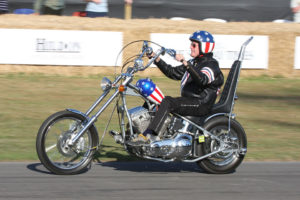 Weird name for a bike, we know. But the Bobber takes the traditional chopper design and strips it down to its roots. Theoretically, any bike can be stripped down into a bobber by removing any excess body parts, lowering the suspension and reducing the weight of the bike. These ‘spartan’ designs are known as a ‘bob’ due to the shortened rear end of the bike itself, minimizing or removing the fender altogether.

Bobber’s aren’t generally available without ordering some customization, but there are a few options that can be had ‘right off the assembly line’. 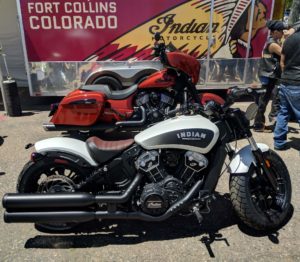 Designed to go the distance and handle both on and off-road (but not too off-road) travel, these bikes are highly capable feats of engineering. In a way, these bikes largely resemble an oversized dirt bike with improved ergonomics and comfort for longer rides. Almost always featuring a ‘beak’, these motorcycles are outfitted with luggage options, sport tires, crash protection and more. 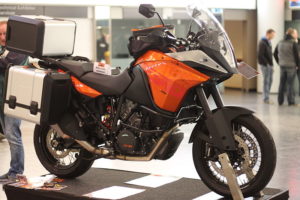 Featuring a subdued but adequate motor, up to date styling, and an ample brake and suspension system, these bikes make for a great first ride for those just getting started. Unintimidating yet fun, the standard motorcycle is usually powered by mid-sized twin engines that are capable yet manageable for most riders.

Often the perfect choice for new riders, standard motorcycles have mostly neutral ergonomics, a shorter seat height, and a wide range of engine sizes from 125cc all the way up to 1000cc.

Examples include: Kawasaki Ninja 650 and the Suzuki SV650 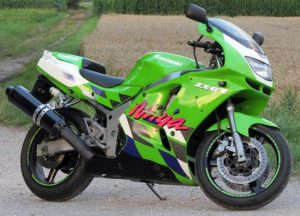 Considered a subcategory of the ‘standard motorcycle’, these bikes bring together everything that makes a motorcycle great, with a modernized retro look popular among younger generations. Although Triumph led the way with this style of bike, other manufactures have also jumped on board, with an ample selection now available to choose from.

Examples Include: the Ducati Scrambler Café and the Triumph Street Cup 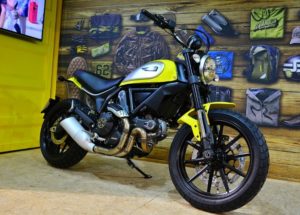 The ‘offroad bike’ of the motorcycle world, dirt bikes are generally lightweight, nimble, and equipped with tires and suspension designed to help you navigate motocross and backwoods trails alike. Typically featuring a single-cylinder motor and sporty plastic covering its frame, these little bikes pack a whole lot of fun. 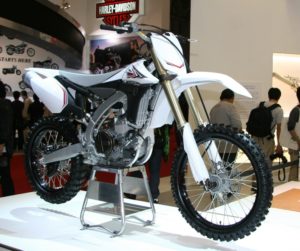 While dirt bikes are engineered for off-road enjoyment, and motorcycles for paved thrills, the dual sport motorcycle makes the most of both worlds.

These bikes are legal for both ON and OFF road 450Fenjoyment, with on/offroad tires pulling double duty. Capable of going anywhere doing (almost) anything, go where no standard motorcycle would dare go before, all with the added safety of features including a horn, turn signals and more.

Seat heights on these bikes tend to be a little taller, which can make these bikes a tad uncomfortable for shorter folks, but this bike makes up for it with an improved suspension able to absorb the ups and downs of backroad travels. 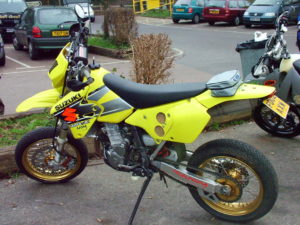 Combine the torque of a single-cylinder motor with the nimble fast action of a dirtbike…but on the streets. This street-legal machine brings together the playfulness and youthful appeal of a dirt bike with modifications making it legal for on-the-road use. 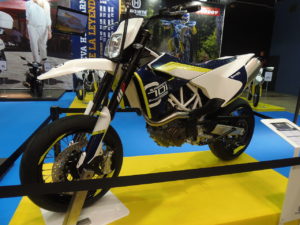 Similar to a retro-styled bike, this unique conception melds together aspects of a standard motorcycle with a retro flair, knobby tires, mudguards, and side exhaust. 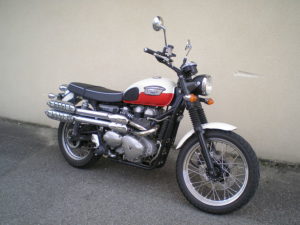 Less common in the USA, Scooters have recently seen a resurgence in popularity, offering a practical, efficient and fun way to get around on two wheels. Characterized by a small engine (usually 50cc-500cc), the scooter is adequate for zipping around town but not generally ideal for highway use.

Transmissions are usually automatic, making the scooter ideal for novice riders and those in ‘stop and go’ traffic. Of note is the iconic frame design, called an underbone, that leaves nothing but space from the rider’s legs to the front of the scooter.

The most notable example: the iconic Vespa 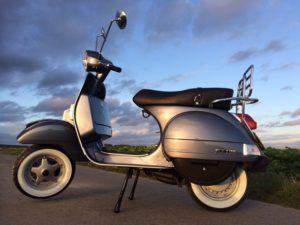 Examples Include: the TaoTao Titan 50.

Motorcycles have long been an iconic, exhilarating mode of travel. From cruising the city streets, to long-distance cruising and even a bit of offroad exploration, the possibilities are endless.

In this guide we introduced you to some of the most popular motorcycle styles and options available, giving you a head start on the search for your own perfect ride. Looking for more information about Motorcycles? Read Our Guide on the Most Reliable Motorcycle Brands and How to Get a Motorcycle License.