What Happens if you Hit an Uninsured Driver? 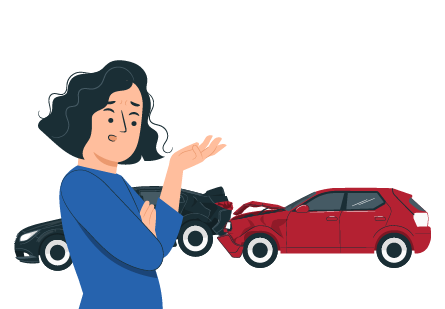 It is estimated that 25% of drivers on U.S. roads do not have auto insurance. Uninsured motorists who cause car accidents cost those who are injured financially as well as physically because they cannot replace the damages done to their property and people.

Many individuals are oblivious to the circumstances of what occurs after an uninsured motorist accident takes place. This article will shed some light on what happens if you hit an underinsured driver or uninsured motorist.

What Happens if you Hit an Uninsured Driver?

If you strike an underinsured driver or uninsured motorist, you don’t want to simply drive away after the car accident and forget about it. You have a duty under the state’s law to report to the police the car accident, especially if the collision damage exceeds $1,000. Not only that, if people are hurt as a result of your actions, you are breaking the law by fleeing, as it’ll be considered a “hit and run” and you’ll become a negligent driver liable for the other driver’s personal injury.

If you are at fault in an accident, you are responsible, and your car insurance company is required to pay for the damages and losses you caused, even if the other driver, or drivers, involved in the car accident does not have car insurance coverage.

The apparent disadvantage of informing your auto insurance company about a car accident is that your yearly auto insurance premiums will most likely rise.

It’s also conceivable that the driver you collided with will not want to file a car insurance claim, especially if it appears minor, owing to the possible fines they may face for violation of driver’s insurance laws. As a result, you could end up paying nothing at all for damage to their vehicle.

Be careful that if you’re in an accident with an “uninsured” motorist, it isn’t always the case that they aren’t covered. To put it another way, if the motorist feels the collision is their fault, they may claim to be uninsured in order to avoid filing a car insurance claim. Whether it’s true or not, you’ll need these auto insurance details in order to refute any allegations.

Watch Out For Car Insurance Scams

Be aware of car insurance scams too. There are people who prey on unsuspecting drivers and create a “deliberate accident."

For example, as you approach an intersection, a vehicle behind you speeds up while another one slams on the brakes in front of you, resulting in a rear-end collision. Because you ran into them, you’re considered at fault. The con artist will then try to file an auto insurance claim against you, frequently claiming more damage than actually occurred or a non-life-threatening injury in some cases. They may try to get you to pay them money so that the accident does not show on your driving record in some cases.

Regardless, it’s always best to call the police. Although you’re likely to get raked over the coals for your car insurance rate hike, it’s still preferable to a penalty for breaking the law. Purchase uninsured driver or underinsured motorist coverage for your present car insurance plan in order to protect yourself.

Even if you have a driving record with some blemishes, you still need auto insurance, and that’s where Insurance Navy can help.

Call 888-949-6289 or request a car insurance quote online today. Quotes are offered at no cost to you. Need further assistance? Stop in at one of our conveniently-located storefronts.