What is an Insurance Peril? 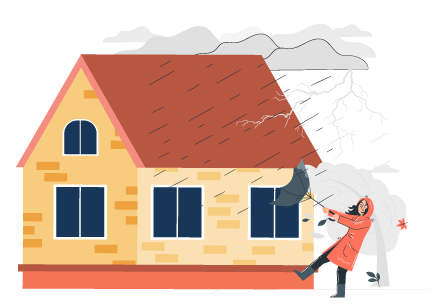 No worries, insurance peril doesn’t mean you’re in peril of losing your coverage if you’re unfamiliar, and that’s your first thought. This isn’t a consequence orientated-piece full of warnings of what not to do, but a guide to what perils your homeowners or renters insurance will and will not include. Of course, we’ll also cover the nitpicking details like the difference between a hazard and peril in terms of insurance and the specific types of perils there are.

What is a Peril in Homeowners Insurance?

An event that causes damage to your home is defined as a peril in insurance terms. They can be due to weather, accidents, or crime.

Some examples of perils are:

What Are The Perils Not Covered by Insurance?

While on the topic of what is covered by peril insurance, let’s also go over what perils aren’t. These tend to be more state-specific disasters or weather conditions that often require a policy and coverage of their own. Some examples would be hurricane insurance in Louisiana or earthquake insurance in California.

What Are The Different Types of Insurance Perils?

Now that we’re aware of what the perils are let’s elaborate on how they are categorized. Fortunately, with perils, there are only two categories by which they are organized.

In turn, these are the two types of policies that can include perils:

Which is Better, Open or Named Peril Insurance?

While both types of peril insurance can be arranged to cover the same things with equal coverage, the difference is always the cost. Those with open peril typically pay more than those with broader coverage. That seems natural, with the costs of the insurance being directly related to how many perils are covered in the property policy. So shoppers have a choice, save and only be covered in the event of certain perils or spend more to be insured in nearly every situation. At the same time, you have the freedom to exclude certain perils from your policy. It’s a personalized process where the total cost is determined by you.

What is The Difference Between a Peril And a Hazard?

The easiest way to think about the relationship between a peril and a hazard is cause and effect. A hazard is something that increases the likelihood of or causes a peril. An example would be the open flame of a candle as the hazard and the fire damage it causes is the peril. When an insurance provider says they cover hazards, they are referring to perils in the same sense. That being said, there are four different types of hazards.

These hazard types are:

What Are The Different Insurance Forms And The Perils They Cover?

These insurance policies are:

What is “Perils Insured Against?”

If you look at your named peril insurance policy, you’ll find a section called “perils insured against.” An open peril policy wouldn’t have one as this is the list of perils you won’t be covered for. Again, these may be state-specific exceptions like how in Louisiana, you would be expected to purchase separate flood and hurricane peril coverage.

Is There Peril Coverage For Cars?

Insurance Navy provides options for home insurance policies that make being covered simple and budget-friendly. Call us at 888-949-6289 for your free homeowners insurance quote today. Quotes are also available online via our website and mobile app.