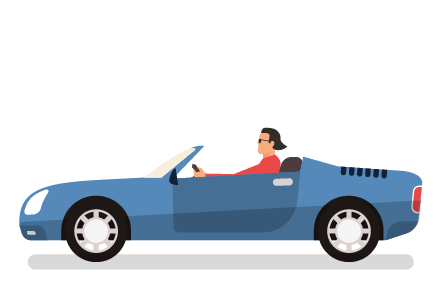 In 1984, the federal government mandated the drinking age to be 21. This was because they found younger drivers to be more at risk for drunk driving. Since then, we’ve seen a decrease in underage drunk driving by more than 80%. This contributes to the total decrease of more than 50% in total drunk driving statistics since the 80s. This is coupled with states’ different methods and legislation cracking down on impaired driving.

Many will refer to driving under the influence as an epidemic in the country. It’s estimated that around 30 people per day are killed as a result of intoxicated driving. Every 20 minutes, there’s a reported injury on account of a drunk driver.

Drinking and Driving Statistics Every Year

Annually, drunk driving can kill tens of thousands of people. It truly makes you wonder how terrible of a problem it was 40 years ago. Since 66% of people are likely to become involved in such an accident in their lifetime, the government formally became involved and has enacted both federal and state legislation to reduce the number of drunk driving statistics.

At the same time, it’s become a universal understanding that driving while drunk is one of the worst things you or another person can be caught doing while on the road. The danger is immediate, the evidence is overwhelming, and the consequences are severe. Above all, drunk driving is a 100% avoidable offense. For every drunk driver, there are at least 100 other drivers who know not to get behind the wheel while intoxicated.

What qualifies as drunk driving?

Driving under the influence, or a DUI (DWI in some states), is legally defined when a driver’s BAC (blood alcohol content) exceeds the federal limit of 0.08.

Some states, like California or Illinois, may employ a zero-tolerance policy where a BAC as low as 0.02 can be grounds for a DUI. Even the slightest sensation of being intoxicated can be written up (buzzed driving is drunk driving). Police may use a breathalyzer to measure a suspected driver’s BAC. Without one, there are some formulas for calculating a BAC of an individual that depends on sex and weight.

Alcohol consumed in grams/ body weight in grams * gender constant value (0.68 for males and 0.55 for females).

The exact amount of alcohol required for intoxication varies from person to person. It’s said that drivers ages 25-34 are the most likely to drive with a high BAC.

History of drunk driving and the statistics

When looking at earlier and more prominent instances of drunk driving statistics from 40 years ago, you’ll notice that it was more than 50% higher than today. People who drove during that time will tell you that drunk driving wasn’t as heavily regulated. The 80s, the time of the Regan-era war on drugs, saw a prioritization of lessening the number of intoxicated driver traffic accidents on the roads.

With the introduction of the drinking age of 21 and several activist groups becoming vocal, drunk driving was soon highlighted in the media and public eyes as an epidemic. In recent years, ride-sharing services have become key in keeping intoxicated people out of the driver’s seat.

Here’s a couple of statistics that show a favorable shift in the battle against driving drunk:

Today, most people recognize the severity and legality of driving drunk as it’s constantly stressed. In addition to the injuries, a death caused by intoxicated driving is reported every 50 or so minutes. Those incidents make up for 30% of traffic-related deaths. Even though the message is out in the open, there’s still a considerable number of heavy drinkers still getting behind the wheel when they shouldn’t.

What are some of the legal consequences for impaired driving?

A DUI or DWI traffic violation is a criminal offense in all states, and they handle it as such. There’s a couple of penalties associated with a DUI, including steep fines, time in jail or prison, and license suspension that could be permanent. There are close public opinions on whether a license suspension should be temporary for first-time offenders than permanent for repeat DUI offenders. Legal consequences also depend on the state in which the violation occurred.

What can driving drunk do to my insurance coverage and rates?

While DUIs require and can cost a lot from the legal end, they can also cause some damage on the insurance end. Not just your premiums, but your risk and reputation with your insurance company. On average the statistics find that becoming involved in a drinking and driving accident can raise your rates by 70% or more. That’s adding well over $1000 for every month in a year for your insurance premium. If it’s a second DUI offense, then your insurer may cancel your policy and drop you as a holder.

Driving your car with an SR22

If your license was revoked, then your insurance company plays a significant role in getting it back. You may need an SR-22 filing to show that you meet the minimum requirements for car insurance before you drive. The SR-22 is required to have a license reinstated or for finding a new insurance company to cover high-risk drivers. Some statistics have found that drunk drivers have even been found to be operating their cars without a license-around 50 to 75% of the time.

Insurance companies have their own different ways of processing a DUI- they judge the time and severity of the accident. Since the DUI will remain on your driving record for a certain number of years, you’ll be paying those increased premiums for that many years. Some people file an SR-22, while others may find a new high-risk insurance company altogether.

During these last few years, especially since the beginning of the COVID-19 pandemic, statistics for drunk driving has declined. People were driving significantly less until September 2020, which saw a spike. This was when some people were starting to get back on the road.

From the year 2019 to the present, here are some more statistics behind the fatalities of drunk driving:

Drunk Driving from underage drivers and the statistics

One of the main reasons Mothers Against Drunk Driving was founded was to protect their kids.

The age demographic of 18 to 24 (college students) makes up for a considerable percentage of impaired driving cases. MADD presents such evidence as:

Gun violence is as much an epidemic as impaired driving, if not more. Much like being impaired behind the wheel, gun violence also kills tens of thousands of people each year-approximately 30,000 fatalities. And, for every one of those deaths, two people are wounded or injured by firearm violence.

According to the CDC, about 100,000 people are involved in gun-related incidents in a year. That’s significantly less than the 4.5 million traffic-related injuries that same year.

What are ways to prevent drunk driving?

Getting behind the wheel intoxicated is always avoidable. Nowadays, it’s become almost common knowledge not to drive drunk. Since the drinking age of 21 was introduced in 1984, it’s estimated that over 30,000 lives have been saved. It’s safe to say that without it, we would see twice the amount of drunk driving incidents. When it comes to new drivers, they may be educated on the dangers of driving under the influence years in advance before they become licensed.

To save lives by not driving when drinking, here’s what you can do:

When it comes to drunk driving, always remember that:

Thousands of people lose their lives due to driving under the influence. With all the social, legal, financial, and insurance impacts of such an accident-it’s never a victimless crime. Fortunately, it has been on a mainstream decline in the last 40 years. But, the struggle to reduce drunk driving deaths is ongoing. If you ever feel inconvenienced when unable to drive after drinking, remember that not getting in the car can save lives.