If you’re living in Green Bay Wisconsin and its surrounding areas, Insurance Navy is one of the best options for finding affordable car insurance that fits your current financial situation. We have skilled professionals who can provide safety for you and your loved ones by guaranteeing quality rates. Our company can also help you secure SR-22 coverage, home insurance, and even motorcycle insurance. Give us a call so we can get you started with a quote today. 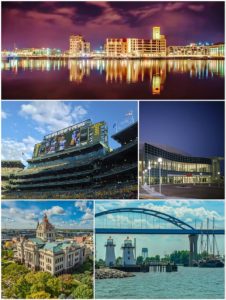 We are a family-owned and operated business with more than 20 years of experience in helping people find the car insurance policy that fits their needs. We have won the Better Business Bureau’s Complaint Free award for our dedication to giving every customer who walks into one of our offices their undivided attention and giving them the car insurance coverage results that we promise.

If or whenever disaster strikes for you in Green Bay, we’ll be there every step of the way. We believe in working with you like family. That’s why Insurance Navy in Green Bay WI will make sure you walk out satisfied, feeling confident knowing you found quality and affordable car insurance while not breaking the bank.

Car Insurance You Can Trust in Green Bay

Insurance Navy has been in the Green Bay area for over 10 years, and we have a reputation that is unsurpassed as one of the best providers of auto insurance. We understand it can be challenging to find someone who you trust with your family’s needs.

When you come to speak to us at Insurance Navy, our bilingual insurance agents will answer any questions about how we’ve helped families like yours get all car insurance needs covered. No matter what type or level of car insurance may suit your needs, please know you are only minutes away from quality service and affordable auto insurance rates.

A Look Into Green Bay Wisconsin

One of the essential details about Green Bay is its National Football League team, the Green Bay Packers. Aside from catching them at Lambeau Field, visitors and residents can enjoy the many other attractions of the city including the National Railroad Museum, Green Bay Botanical Gardens, and the Bay Beach Amusement park, to name a few.

The Green Bay Metro area offers various transportation options for getting around the city. The central station is downtown and provides service to both local suburban regions and regional connections to other locations in Wisconsin via Jefferson Lines, Indian Trails, or Lamers Bus Lines.

Getting Green Bay Car Insurance is Easy with Insurance Navy!

Car Insurance in Green Bay WI is only a click away.