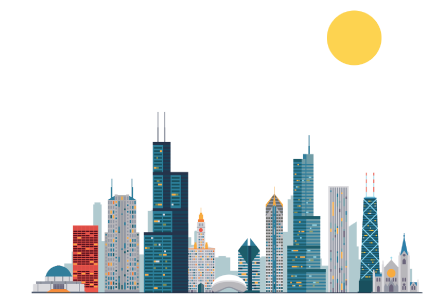 Chicago’s famous Navy Pier has been featured in a handful of movies and TV shows over the years. The list of movies featuring the iconic location includes 2008’s The Dark Knight and 2014’s Divergent. Navy Pier appeared in Divergent when Tris (Shailene Woodley) and Four (Theo James) share a romantic moment atop a Ferris Wheel during a game of capture-the-flag (pictured above–top image).

Navy Pier was also used in The Dark Knight as the setting for the scene in which scared Gothamites have to board two ferries in order to escape from the city (pictured above–bottom image). This happens after the people of Gotham receive a dangerous threat made by the Joker (Heath Ledger).

The Chicago Theatre has made two appearances on the big screen in the last 18 years–The Dark Knight and Save The Last Dance. In Christopher Nolan’s 2008 Batman film The Dark Knight, the theatre makes a brief appearance when Harvey Dent (Aaron Eckhart) and Rachel Dawes (Maggie Gyllenhaal) attempt to see a ballet. Unfortunately, the couple can’t enter the theatre to see the ballet because, as a sign on the door says (pictured above), the performance has been cancelled because Bruce Wayne (Christian Bale) has taken the whole array of dancers away on his Yacht.

The exterior of the Chicago Theatre also makes an appearance in 2001’s Save The Last Dance when Derek (Sean Patrick Thomas) takes Sara (Julia Stiles) out to the ballet. Once again, only the exterior of the building is featured in the shot.

In The Dark Knight, one sequence features Batman going into a night club to bust some heads (a sequence which can be seen in the picture above). This scene was shot in a club known as Sound Bar, which is still open and operating today.

This is one of the eeriest and most iconic movie filming locations you can visit in Chicago. The Brewster Building was famously used as the setting for the 1988 film Child’s Play, which spawned the iconic horror movie icon Chucky (voiced by Brad Dourif). In fact, this building was featured prominently in the marketing material for the film when it was released.

1986’s Ferris Bueller’s Day Off features the titular character (Matthew Broderick) and his friends rabble-rousing all across downtown Chicago. One of the film’s many iconic scenes features the trio going into an art museum and looking at some of the famous art pieces on display. This sequence was shot in the Art Institute of Chicago.

Would you like additional information about car maintenance or insurance? Our customer service team is here to help. Call us today at 1-888-949-6289 or visit your nearest Insurance Navy location. For your convenience, Insurance Navy is open from 8 a.m. to 9 p.m. CST, 7 days a week.

If you’d like to take a look at more movie-themed blogs, we have a bevy of them on our website. Consider taking a peek at these before you leave: