Skip to content
Insurance Navy Brokers COVID-19 Announcement: Insurance Navy Brokers will remain open for business with regular office hours. Insurance Navy Brokers will WAIVE ALL payment fees until 05/15/2020. These fees will include: over the phone fees processing fees (new business, renewal, monthly payment, endorsement), late fees (on-site or over the phone), cancellation fees (on-site or over the phone), reinstatement fees (on-site or over the phone). Please note, our office doors will remain closed / locked. Payments including check and money orders will continue to be accepted at the locations, but customers and new prospects will be unable to enter any location. As an insurance agency / insurance service office, we will remain open per COVID-19 Executive Order NO. 8 Sec 12. Essential Businesses and Operations. For the purpose of this Executive Order, Essential Businesses and Operations means Healthcare and Public Health Operations, Human Service Operations, Essential Government Functions, and Essential Infrastructure, and the following: Professional services, such as legal services, accounting services, insurance services, real estate services (including appraisal and title services). If there's anything we can do to further assist, please notify our management team at 888-949-NAVY. We are open Monday to Saturday (8:00 A.M. to 9:00 P.M.) and Sunday (10:00 A.M. to 6:00 P.M)  We are all in this together.      - Management
Facebook-f Twitter Linkedin-in Pinterest Youtube Instagram Envelope

Classic car owners love to find old models to restore back to their former glory. Some prove more difficult than others due to lack of available parts and the high price tag on some of those cars, but never the less, we till see people rolling out in their classics during the summer time.

One classic which is rising in value is the 1954 Volkswagen Beetle and other older models of the Beetle. The Volkswagen Beetle, otherwise known as “The People’s Car” in German, has been in production since the late 1930s. Some people may recognize the car as the protagonist of the Herbie the Love Bug films, though that isn’t the 1954 VW Beetle specifically.

Owning an early Volkswagen Beetle is easy to find and the majority of the repairs you will have to do will be easy. This is one of the best classic cars to own for a first time buyer and you are sure to get some good looks from pedestrians and other drivers when you are behind the wheel.

Early versions of the Beetle are notoriously known for their “oval shaped” window and these models have become increasingly popular which drives up the price.

This 1954 Beetle which comes from a seller in California is really one of the special ones on the market. This Beetle sports an opposed-four, air-cooled 1200 engine that generates 36 horsepower, which is not a lot but a is a big improvement over earlier Volkswagen models.

Along with a restored interior, the classic and original sheet metal, original headlights and restored original steering wheel all make this particular Volkswagen Beetle one of the best you can find on the market.

Early Beetles like this one are in demand and can be found in the mid $30,000 price range.

Known once as “the People’s Car” the Beetle is a classic and ones like the model above will certainly be in high demand and will not stay on the market for long.

The final original Volkswagen Beetle was produced in 2003 and has stopped since.

Owning a classic car is a fun project and a nice antique to have in front of your home or stored in the garage. With anything important however, make sure you keep it protected. Having an antique auto insurance plan is the best way to do that. These plans will keep your classic protected and safe while on the roads, helping you in the case of an accident, scratch, dent or it being stolen. There are many great and cheap classic car insurance options out there. 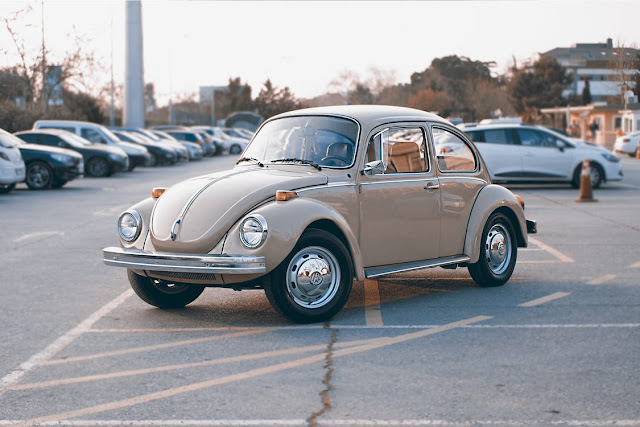 Our customer service team is here to help with any and all of your insurance coverage needs. Call us today at 1-888-949-6289 or visit your nearest Insurance Navy location. For your convenience, Insurance Navy is open from 8 a.m. to 9 p.m. CST, 7 days a week. Insurance Navy also has a strong presence on social media.

If you’d like to take a look at more blogs about proper car maintenance, we have a bevy of them on our website. Consider taking a peek at these before you leave:

How To Find Your Car’s Recommended Tire Pressure

A Colorful Guide To The Many Types Of Car Leaks

The Warning Signs Of Your Car Engine Overheating

We exist to help our customers with all of their insurance needs.

We do our best to stay  ahead of our competitors, with the choice of our partners and services . We are strong believers in technology and its ability to make our life easier. We have resourceful and adaptive agents who serve clients with passion.